Boxing is a recurring theme in my painting work. The theme is very touching to me. I am not a fanatic one, but boxing represents an argument that I feel to be part of and is, therefore, increasingly taking root in my work. Over the years, artists had been felt attracted to the image of boxing, thanks to evoking visuality and its codes: punching bags o speeding bags, the ring, gloves and, especially, the very body fight between the opponents that touches us in our human nature. This resemblances our own stories and struggles. For any reason, it is a natural relation to boxing that one has. It, like characters such as Mohamed Ali, goes beyond sport to jump into icons of personal social and political battles. Movies like «Rocky» take part in the contemporary culture and our social symbolic assets. Boxing is pivotal in my imaginary work and obsessive visual approaches, associated with the subculture of boxing, poverty, dilapidation, characters that fights for glory. The romantic idea of the anti hero and my obsession to stare at the insignificance, triviality and common that become main character and master of its own destiny is part of my approach to life.
In light of this, I will show an Installation called Against the ropes. The title is referred as to a boxer´s being attacked and between the ring ropes, thus depicting a relevant moment for both opponents: one´s fighting for leaving the ropes; and the other´s trying to keep the latter under siege to culminate

the fight. This very moment in boxing serves as a metaphor to address the vulnarability of life and our attitude in daily struggles, resistence and endurance that everyone should show before attacks in real life.
With these ideas, I present an installation out of a playful conception of creating by resorting to diverse images to reach metaphors into my imaginary world. The installation offers a space of existence to the need of putting together many things and to irony, humor, audacity with a view to reflecting on the mankind and their animal condition. It is an absurd intent of congregate incompatible elements with drama and ecstasis, thus giving the precarious condition of carton – depicting considerably alot- which bears the construction of a palimpsest full of storytelling that unfolds to embark on potential worlds, worlds of lines in drawings developed in spaces, lines, supporting ropes that define by themselves. The drawings on bi- dimensional support expand along wires and structures to physical space that gives company to the hybrid, heroic and conflictive characters throughout their battles. These characters celebrate paradoxically vitality and frenetical life in an absurd story that not only tackles boxing and the fight that brings us against the ropes, but also the reflection on the space where we live, the world and its elements. 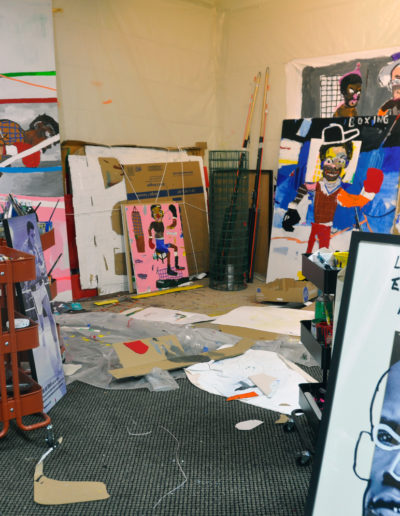 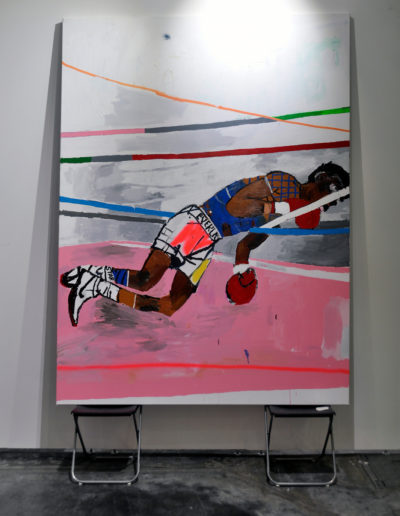 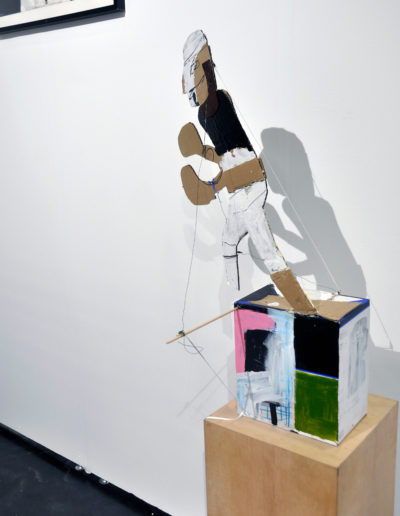 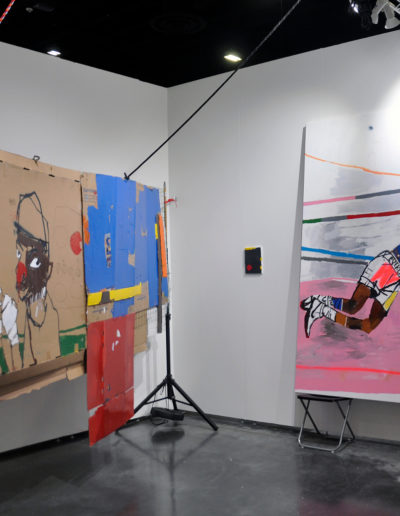 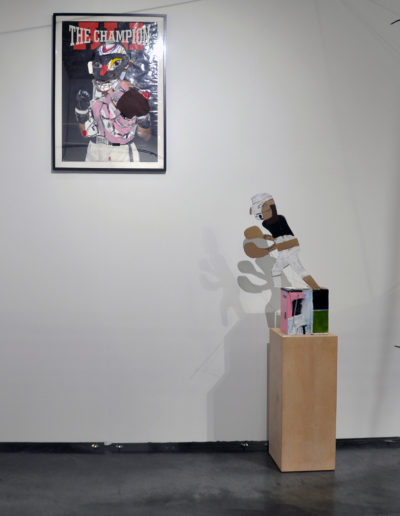 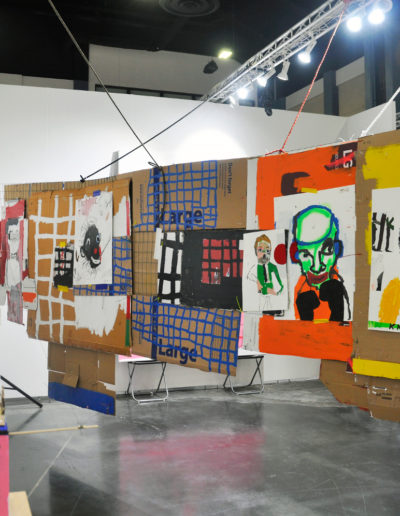 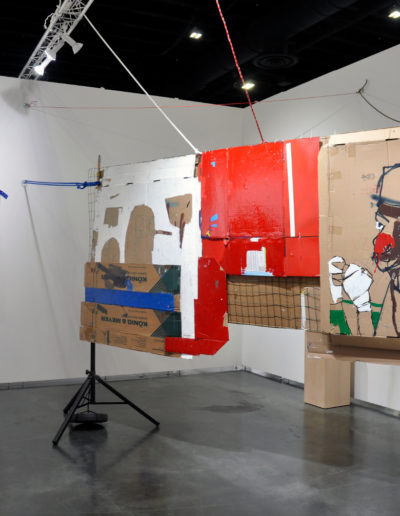 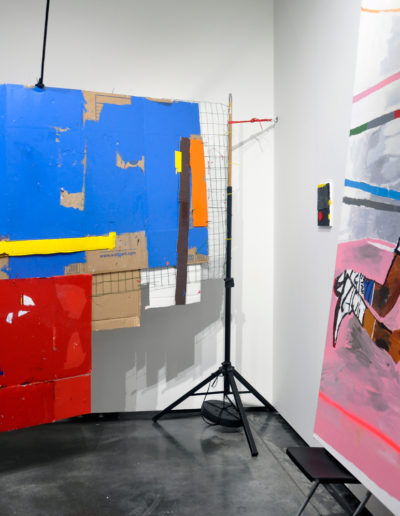 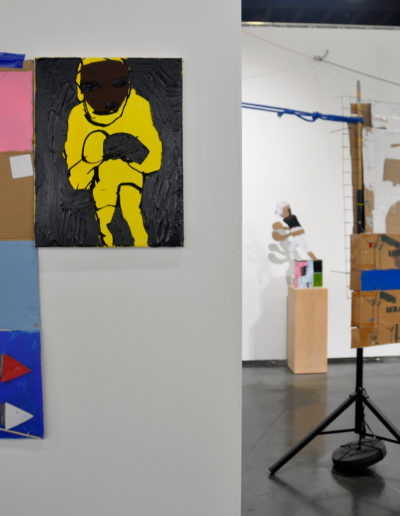 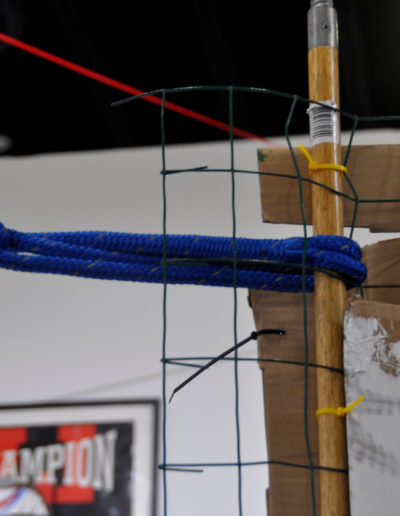 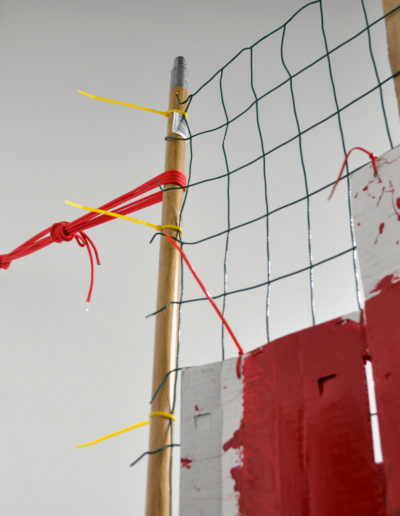 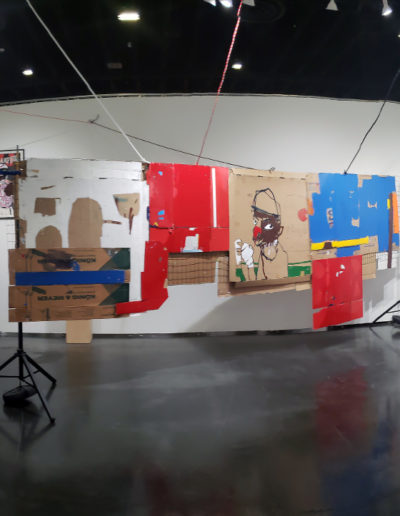